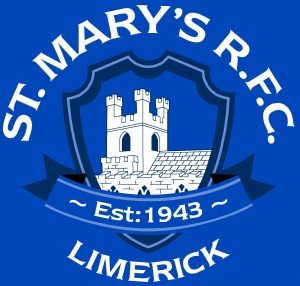 Our Title Is Our Glory…

St. Marys Rugby Football Club was founded in 1943 in the shadow of St. Mary’s Cathedral in the heart of St. Francis Abbey when a group of sporting enthusiasts that included Harry Bedford, Paddy Mc Sweeney, Michael Bourke, Michael Kelly, Paddy Casey, Tommy Carr and Michael Doran decided to form a new rugby club to cater for the the many young men of the area. The club applied for membership of the Munster Branch in April 1943 and on the proposal of Peter Galbraith (Garryowen) and seconded by Charlie St. George (Young Munster) they were accepted.

The first meeting of the club was held in St. Mary’s Hall (Todsies) and a committee was formed. Michael Kelly was elected President, Paddy Casey as Secretary and Tom Joe Finnan as Treasurer. Tom Joe was replaced by Michael Doran after a short period due to work commitments. The committee comprised of Tommy Carr, Harry Bedford, Tawdy Clancy, Sean Keogh, Peter Mc Namara, Paddy Mc Sweeney and Joe Hanrahan.

In the early 1940’s St. Mary’s like most junior clubs did not a playing pitch for home games and so depended on the goodwill of others to fulfil their fixtures. Most of the training was done on the Island Bank but in bad weather the forwards used St. Mary’s dance hall for scrum practice in their socks. Many playing areas were used for home matches including Scouts Field, Slattery’s Paddock, Regans Field, and Nash’s Field before they obtained their own pitch at Corbally.

The facilities that the club have now are second to none having come on in leaps and bounds since those early days and having completed the first phase of the re- development which included a complete new playing surface which is one of the best in the country this is to be followed by the erection of state of the art floodlights. There is a lovely clubhouse with a capacity of 270 people to cater for any occasion and an all weather pitch which is 40m x 20m and floodlit. All this is complemented by three changing rooms, a referees room and showers which is a long way from the days where the players used to wash themselves in the river after training and games.

Now heading into our Seventy Ninth year our Junior side is playing in the newly reformatted Junior League Conference C of the Munster Junior League, where we hope that the coming season can be a successful one where we can gain promotion to the next conference.